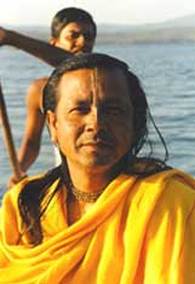 Sri Vinod Vihari Goswami became well-known amongst the Bengali and Adivasi villagers and was regarded as a friendly 'uncle' or even a kind of 'mayor' - with love and reverence he was referred to as 'Guru Dev', which literally means 'sweet friend and guide'.

His inherent wisdom and calmness proved invaluable in counselling the poor communities who faced so many problems, and in building a friendly relationship with the local Adivasi tribes.

Sri Vinod Vihari Goswami helped many of the Bengali villagers to remember their cultural heritage and encouraged them to follow the tradition of holding 'kirtans' or devotional music festivals. He also invited the native Adivasi tribes to participate in the festivals, and in doing so began the process or healing the animosity of the Adivasis towards the Bengalis, which had been caused by the arrival of 40,000 Bengali refugees on what had been exclusively their land.